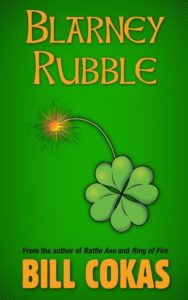 Cover reveal! I had hoped to release it today, in honor of St. Patrick’s Day, but the cover will have to do (courtesy of Mike Sottong). With a little “luck,” the book will be available very soon. If you’d like an Advance Reader Copy to review, let me know and I’ll add you to the list!

Can he keep quiet enough to hear destiny calling?

For a local politician in the North Carolina mountains, Frank McCarthy has been remarkably good at keeping his mouth shut. His soft-spoken ways got him elected to the school board and helped him overturn a longstanding zoning policy. At home, though, his wife yearns for more conversation, compliments and compassion.

After a funeral trip to his ancestral Ireland, with a detour to kiss the Blarney Stone, Frank’s behavior takes a turn for the bizarre. He’s caught on camera groping an intern and his public apology fuels a social media circus when Frank goes way off script. A friend suspects he’s been blessed with the Blarney Stone’s fabled “Gift of Gab.”

Blessing or curse, Frank can’t shut up, and to save his career—and his marriage—he returns to Ireland to confront the Blarney Stone and break its grip on his tongue. There he encounters a demure grieving innkeeper, a patriotic security guard and a scheming grifter who all offer to “help” Frank to complete his quest. Compounding his trouble are a trio of mythical creatures who seem to have sprung to life from the long-forgotten Celtic tales of his youth.

Being Irish has never brought him much luck, but breaking the curse will require Frank to finally embrace his heritage, with all its flaws. Going up against a centuries-old stone calls for rock-hard resolve.


Available in Spring 2016, Blarney Rubble is a fresh, contemporary mix of suspense, relationships and humor in the tradition of Carl Hiaasen, Christopher Moore and Janet Evanovich.