A Funny Thing Happened on the Way from the Forums. - Margarwriterville 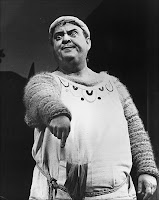 I allude, of course, to the 1962 Broadway masterpiece. The book is credited to Larry Gelbart and Burt Shevelove, but for my money, the show wouldn’t have gotten off the ground without Stephen Sondheim’s score and lyrics.

As sung by Zero Mostel.

Once called “nothing but a belch of a man” by my ever-derisive drama teacher, Zero took the role of Pseudolus, turned down by Phil Silvers and Milton Berle, and worked his big, fat, sweaty magic with it. He’s occasionally out of tune, his dynamics lack any sense of subtlety and he’s frequently out of breath. It’s incredible. If you ever come across the soundtrack, give it a chance. But steer clear of the ’66 film version, which did away with half the songs and fell all over itself trying to look like an episode of “The Monkees.”

Just when I thought I was ready to forge ahead with my query, rejection after rejection proved me wrong. Having exhausted my friends, family and writers’ group, I did what any writer would do under the circumstances: I turned to complete strangers. I used an assortment of forums and posted the current version of my query there and invited feedback. The comments came fast and furious. Over a week or two, I re-shaped it into something meeting with most people’s approval–and keep in mind, these are, for the most part, people like me, not authors with dozens of novels to their name or veteran literary agents. But they can step back and be objective about it where I can’t.

It’s hard enough being Michelangelo’s son. But find out you’re Michelangelo’s adopted son and you might as well chuck the chisel—genetically, you’re hosed. That’s how Dorsey Duquesne feels, slogging away on a guitar in the shadow of his saxophone legend father. He discovers why his tunes consistently blow when his emotionally distant mother breaks a marriage-long pact on the eve of her husband’s funeral and reveals Dorsey was “acquired” as an infant. His known world yanked out from under him, Dorsey becomes obsessed with the life he was denied.

Clinging to an anonymous letter and a shoebox of his father’s old demo tapes, he chips away at the secrets surrounding his so-called adoption. Answers arrive in the form of a strudel-baking redhead claiming to be his real mother. She sweet-talks her way into Dorsey’s heart, family and wallet, but her charm masks a darker agenda. With the help of a one-eyed detective and a disabled medieval warfare fanatic, Dorsey overcomes his identity crisis while his new “mom” schemes to put him in the poor house—and in the ground.

With their help, I sent out this new, improved query and have already received a request for three chaps and another for the full MS. I drink to you, my faceless brethren.

And I link to you, too–see right.