He did it, but can I? - Margarwriterville 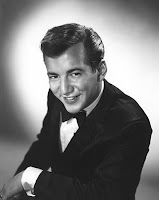 Genre-hopping. Let’s check in with Neil Young on the subject:

“I used to be pissed off at Bobby Darin because he changed styles so much. Now I look at him and think he was a f—ing genius.”

I’ll go on the record right now as being one of the planet’s biggest Bobby Darin fans. In my book, he’s second only to Sinatra. No one had the swing or swagger down better. Not Bennett, not Torme, not…well, hell, who else was there? Sammy? Nat? They had their moments. Harry Connick, Jr. and Michael Buble give it their best, and Harry comes close on occasion, but there’s an over-earnestness to both of them. At least Harry can write and play. Buble is professional karaoke.

Back to Bobby: what else makes this guy so freaking cool? He wrote a ton of his own material. Take that, Sinatra. Problem with Bobby is that he was born a decade or so too late. By the time he cut “Mack the Knife,” Sinatra’s brand of swing was on the way out. So over the next ten years, he bounced around from swing to country to folk, writing his own stuff all the way. His last record contract was on the Motown label, for Pete’s sake. How versatile can you get?

Now, I don’t love-love his folk or country stuff, but I’ll give him points for authenticity–that is, he doesn’t sound like a poseur. He really pulls it off, no matter what he does.

Thing is, can I? I know the “comic suspense” genre pretty well, having written two novels in it so far. As I try to break through with both Ring of Fire and Battle Axe, I’m finding myself drawn to another, totally foreign territory: young adult adventure. I didn’t read a lot of it as a kid (I don’t think there was a lot of it when I was a kid), but it’s a beyond-huge genre right now, thankyouveddymuch Ms. Rowling.

My son read The Lightning Thief last year and got hooked on the whole series. Intrigued, I picked it up to see what all the hype-la was about. I appreciated it, but didn’t quite see anything going on there that I hadn’t encountered over the years as a reader. Solid, but nothing groundbreaking.

Kinda like my writing, if I say so myself.

So instead of writing yet another comic suspense novel that agents “don’t know what to do with,” I thought I’d take a crack at something that’s actually selling these days. And I’ve got a couple of built-in test readers just down the hall from my bedroom.